With less than two hours notice, community members flocked to Trolley Square in Wilmington Wednesday night to show their support for refugees expected to arrive in the First State in the coming months.

Supporters from various faith groups and organizations held up signs near the Soldiers & Sailors Monument – hoping to catch the attention of cars driving by.

Many attendees feared an executive order from newly elected president Donald Trump could block the arrival of those families – especially those from Syria and Iraq. 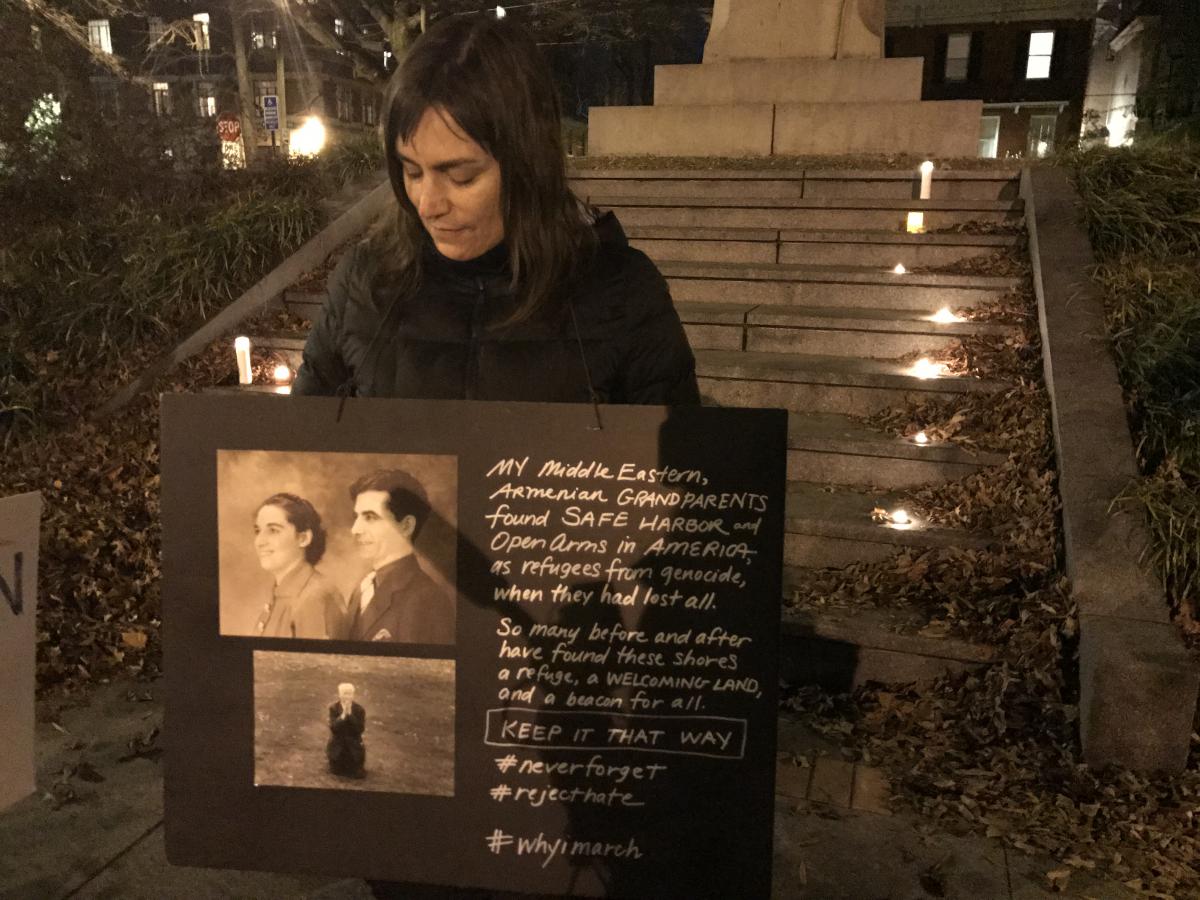 Wilmington resident Emily Artinian holds up a sign with photos of her grandparents who fled to safety in the United States during the Armenian Genocide.
CREDIT MEGAN PAULY / DELAWARE PUBLIC MEDIA

Among them was Wilmington resident Emily Artinian. She held up a sign with photos of her grandparents – who escaped the Armenian genocide and found refuge in America.

“A lot of my relatives – their relatives – actually escaped that through Syria and I have some relatives who lived in Aleppo for quite some time,” Artinian said. “I have a godson who is Syrian who lives in London, so I’m particularly concerned about refugees from the Middle East.”

Delaware was one of only two states that didn’t resettle Syrian refugees in FY16 – but was hoping to change that this year. 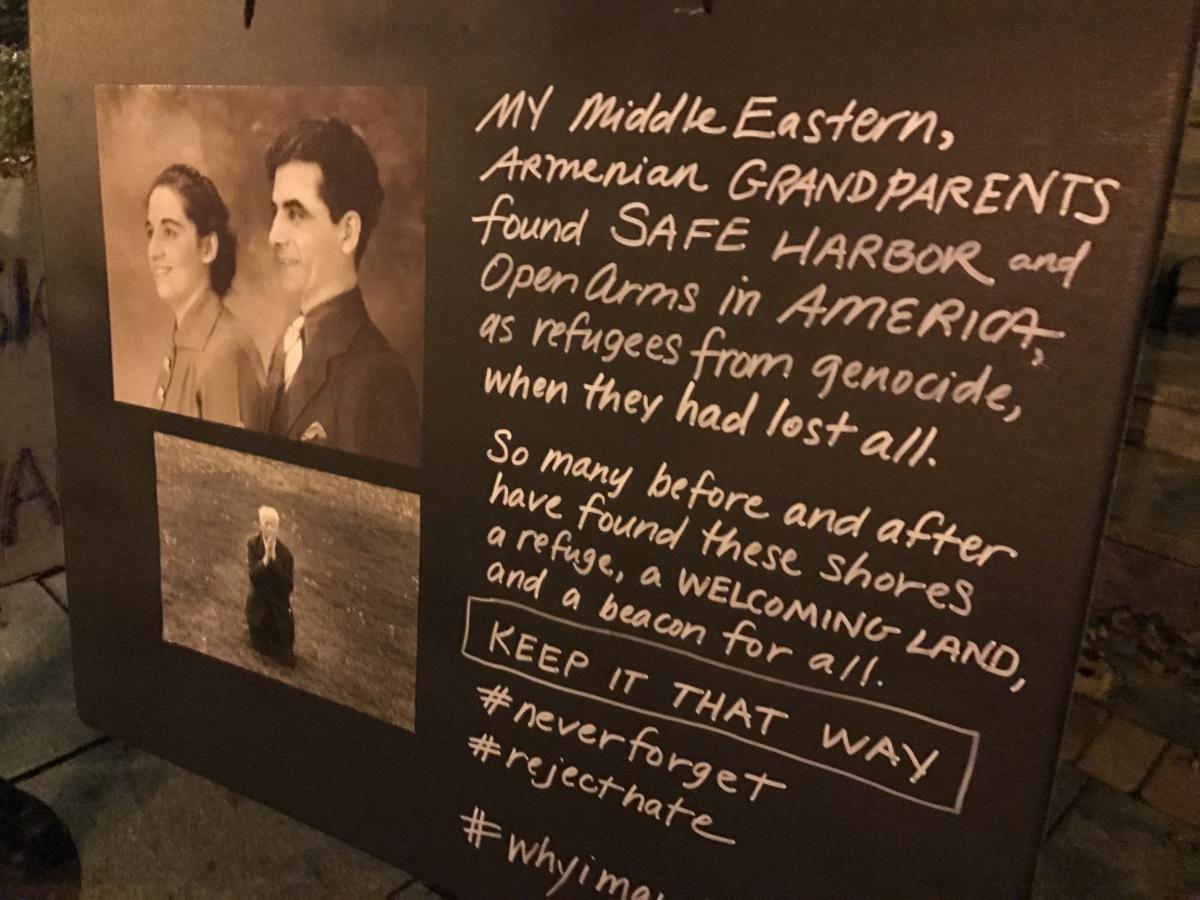 Through a contract with HIAS – one of nine federal resettlement agencies –  Jewish Family Services of Delaware (JFS) has been working to bring at least six refugee families – including at least one from Syria – to the First State this year.

But Sarah Green, the JFS Resettlement Program’s Volunteer Coordinator, worries that draft executive orders from President Trump this week could stop those families from coming.

One draft plan would stop all refugee resettlement for at least 120 days, another would halt the resettlement of Syrian refugees altogether.

“I cannot feel any more sad for people who are just trying to escape – people who are victims of war, and terror and torture, being separated from their families, losing family members,” Green said. “This is their hope and it’s just being pulled away from them at the last minute, these families that we’re already preparing for, families that are in our pipeline.”

Two of the refugee cases JFS is handling are family reunification cases. Green says one case involves a man who was slated to come join his wife in Wilmington – now if and when he will be able to come to Delaware is uncertain.

“It’s just really scary to see that executive actions can have such quick and swift implications on the personal and local level affecting humans,” said social worker and Delaware Center for Justice re-entry teacher Theresa Sullivan, who also attended the rally Wednesday. “I think this is important for our nation and our local community to be caring about hospitality and sanctuary. I just really hope changes can be made, resistance can happen and that people just keep showing up wherever they can.”

“I think we should just make posters about all the causes that we care about,” Sullivan said. “Because then – unfortunately, as soon as we need them – we can just pop up and have them ready to go.”

10-year-old Bassam Amir Rafique attended the rally with her mother. Bassam grew up in Delaware, and his parents came to the U.S. from Pakistan. 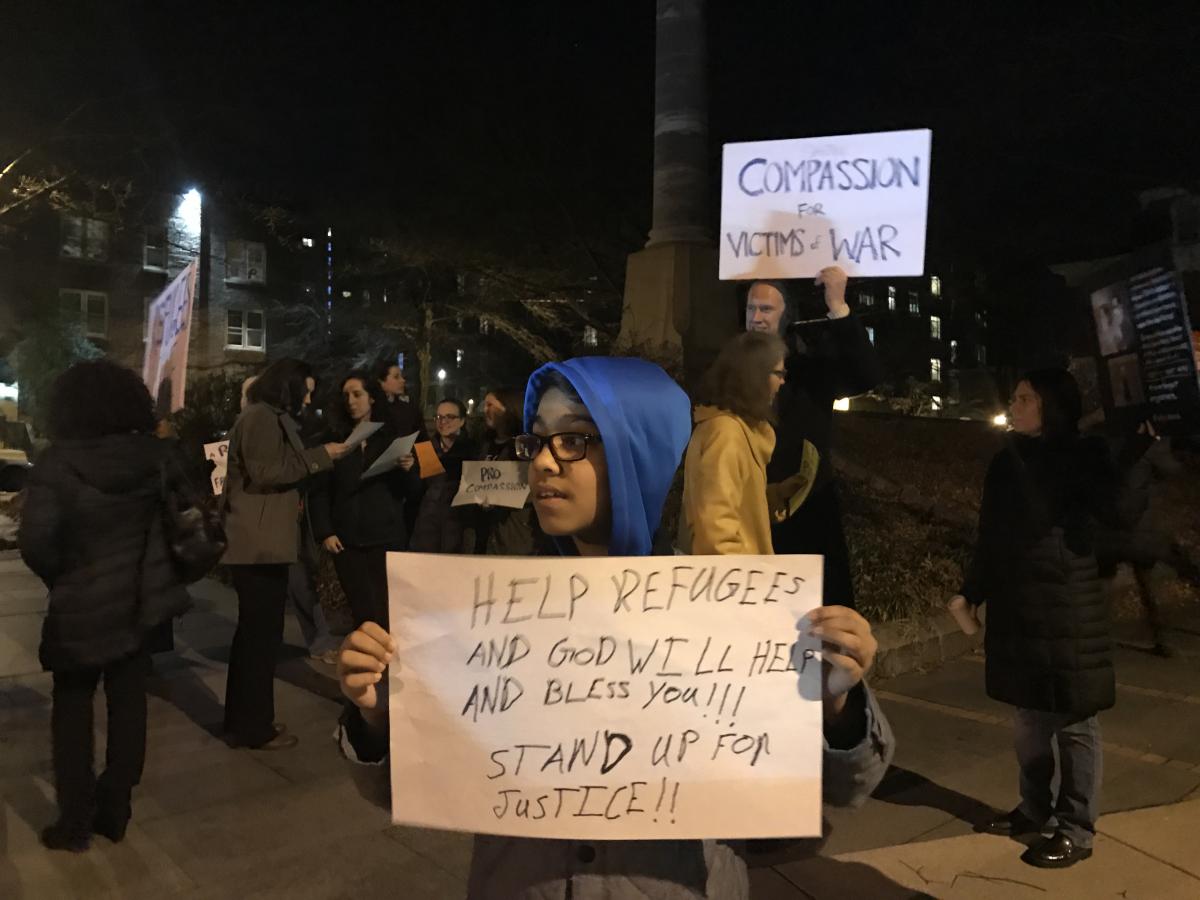 “It’s not fair – they’re human beings just like us,” Rafique said. “And they’re not being treated fair, they’re being treated like dirt. So we want to show that we are standing up for refugees and we care about them.”

They attended the rally representing the Islamic Society of Delaware, which has been helping to coordinate resources for incoming refugees locally.

Wilmington’s Beth Emeth Rabbi Elisa Koppel addressed the crowd of supporters, quoting the words of Emma Lazarus on the Statue of Liberty in a prayer.

“Give us your tired, your poor, your huddled masses, yearning to breathe free,” Koppel said. “May we all welcome those huddled masses with open arms and may we be allowed to.”

Koppel was among 1,700 rabbis across the country who sent a letter to elected officials urging them to keep America’s doors open to refugees.

“One of the great mandates of Judaism is that we should help the stranger because we were strangers to the land of Egypt,” Koppel said. “And for many of our families it’s not too many generations back that our own people were refugees and we know how many Jewish people were turned away. We want to make sure that’s not going to happen, and as a country I think it’s our duty to be a beacon and a light and to show the world how one is supposed to act. I don’t think this [Trump’s potential executive orders blocking refugees from entering the country] is American behavior.”