After the recent Paris attacks, anti-Islamic sentiments and racial profiling are at risk of rising in the United States. Sikh men wear turbans for religious reasons, and are sometimes wrongly mistaken for Muslims and even terrorists. A local Montgomery County group is trying to change this by educating teachers about Sikh culture.

On a Saturday morning in November, several women are chopping vegetables and mixing spices. They’re preparing a chickpea curry for more than 25 guests. It’s called a “Langar,” a free community meal, and a Sikh ritual.

“I’ve had kids tease me before saying, ‘Oh, what if I just cut your hair, wouldn’t that be funny?’ And I say, ‘You know it really wouldn’t be that funny,’” Mangat says.

Uncut hair is a pillar of the Sikh faith. Mangat says one of her friends had her long hair chopped off during class by other students.

“She was a little kid who didn’t know what to do because she felt guilty, like this is my identity, and someone else took it away and I let them; that was her thought process,” Mangat says.

But for Sikhs in the United States, there’ve been far worse incidents than cutting hair. In 2012 a white supremacist shot 10 people in a Sikh temple in Wisconsin, killing six of them. It was the deadliest attack on an American place of worship since 1963.

In the wake of this violence, Hana and her mother started a group here in Montgomery County to raise awareness about the religion. It’s called Sikh Kid-to-Kid and since 2013 members have been working with teachers and counselors at Montgomery County Public Schools.

“The message we gave them is that, culturally, Sikh kids are very humble and they’re not going to come knocking on the door when they have an issue; especially not an issue of being bullied or troubled by somebody,” says Harminder Kaur, Hana’s mother. 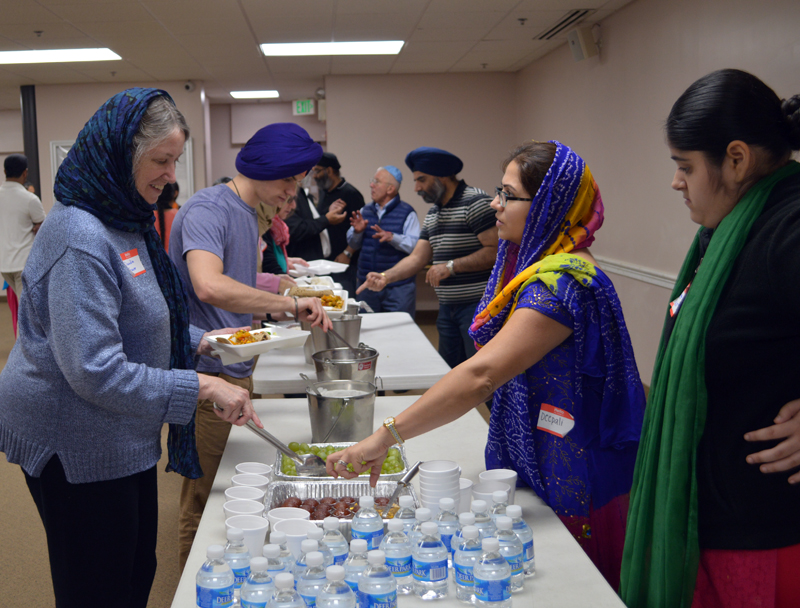 As part of a training for MCPS teachers in November, a traditional Sikh meal known as Langar is served at the Guru Gobind Singh Foundation in Potomac, Maryland.(Megan Pauly/WAMU)

Many Americans know nothing about Sikhism

There are about 10,000 Sikhs living in Montgomery County. In the D.C. Metro area, there are 25,000 to 30,000. But many of their neighbors don’t know much about their religion. A recent poll showed that 60 percent of Americans know nothing about Sikhism.

“I hadn’t actually even ever heard of the Sikh religion until I had a student a few years ago who was wearing a turban and he volunteered some information to me,” says Mary Carter, a Head Start teacher at Beall Elementary School in Rockville. Carter was one of about two dozen MCPS teachers learning the basics of Sikhism at the Guru Gobind Singh Foundation in November.

Sikhism is the fifth largest religion in the world. It was founded in India’s Punjab province in the 15th century, a breakaway from Hinduism and its caste system. Sikhs adopted turbans — at the time a symbol of royalty — to signal that all men were equal.

So far, Sikh Kid-to-Kid and Montgomery County Public Schools have held four teacher trainings like this one. Tara Kelly is a curriculum specialist with MCPS.

“The training is by invitation. Any teacher or administrator is allowed to take it, but for the curriculum it is a required part of the sixth grade curriculum that the kids learn about Sikhism,” Kelly says.

She says the teacher trainings are especially important to prevent bullying. And it seems to be working.

“We’re hearing that the kids have had very positive experiences and I’m hoping that’s because more and more people are being educated about the religion,” Kelly says.

After the training, Mangat said she was impressed with the teachers’ openness.

“I’m very happy with it. I think we had such a wonderful group of teachers. A teacher tied a turban. They were so willing to learn it was awesome,” Mangat says.