Local artist D. Marque Hall works for the City of Wilmington overnights, while also training to be a professional boxer. And in between those two pursuits, Hall produces and prints his own Black Lives Matter themed coloring books.

He sat under a shaded tent during the People’s Festival in Wilmington hard at work, creating a colorful collage of historic African American American faces and quotes.

He was also giving out coloring books he’s illustrated for free, featuring the outlines of historic black figures like Booker T. Washington, Fred Hampton, Ida B. Wells and Lorraine Hansberry – author of A Raisin in the Sun – as well as others recently in the headlines.

“Trayvon Martin, Tamir Rice, Eric Garner, some of the uglier, more heinous victims. There’s so many more that aren’t here. There are over 100 individuals I included in the coloring book.”

There are two versions of Hall’s coloring book, an adult Black Lives Matter version and a kid-friendly one called Black is Beautiful without some of the names just mentioned.

Hall is on a mission to help connect kids to their roots – something he says isn’t happening in school history classes, or society.

He quoted activist and author Michelle Alexander from a Black Lives Matter edition of Essence magazine.

“We are no longer traveling the same road as Ella Baker and Martin Luther King, Jr. Our nation has slashed budgets for education, job training, economic development, drug treatment – while investing billions in the prison system and militarizing police.”
Hall sets up a table displaying his artwork at various city and statewide events like the Rodney Square Farmer’s Market on Wednesdays. He’s also been taking around a poster-sized version of the coloring book cover he calls the artistic petition to collect signatures. 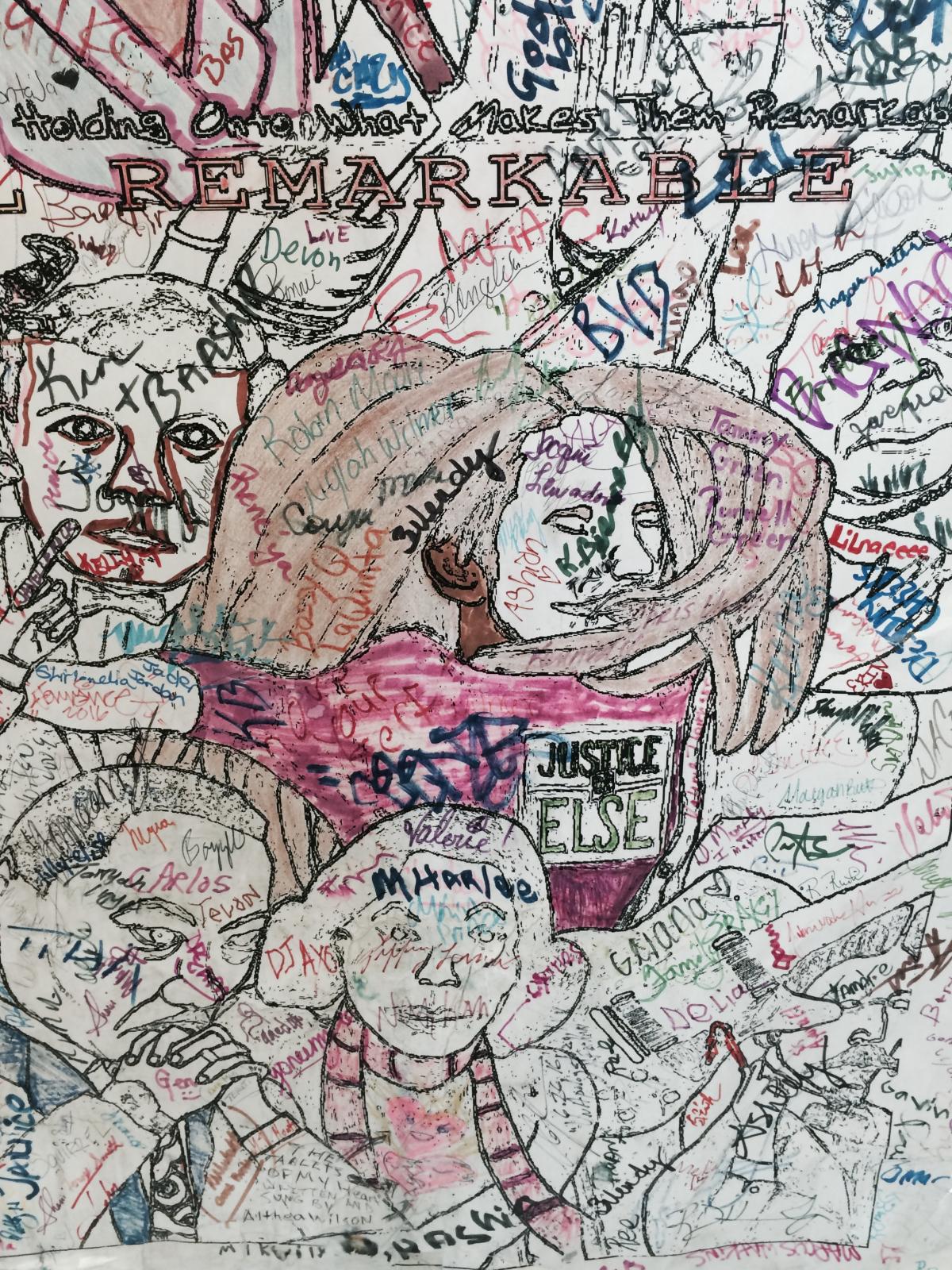 Hall is trying to counter that feeling through his coloring books.

“We definitely matter, we’re all remarkable and that’s the message I want to convey in the book, in all my books, all my art and everything that I do,” Hall said.

Hall takes the cause very seriously – spending a large chunk of his part-time salary from his overnight shift for the City of Wilmington to print the coloring books at Parcels in Wilmington.

He spends so much money printing and distributing the coloring books for free that he hasn’t been able to afford to pay rent for several months, and is in transition.

He also finds himself coming up short on sleep, but insists that he doesn’t need it. Working the overnight shift and training to become a professional boxer in Philadelphia, Hall is limited to napping at the gym.

He says he wants to be like Muhammad Ali, pointing him out in a recent piece called Revolution Ain’t Pretty.

“This is my hero Muhammad Ali, standing in front of a crowd, a crowd of people marching,” Hall said. “It’s actually a crowd of Black Lives Matter protesters marching.”

Behind Ali are a colorful sea of other historic and iconic figures, similar to Hall’s coloring book images.

Hall has been training diligently at the Joe Hand Boxing Gym in Philadelphia, with an eye toward making his pro debut on October 29th – the same day Ali debuted several decades ago. Hall trained for the Olympic trials but couldn’t afford to compete in all rounds.

“He came back from the Olympics in 1960 with a Gold Medal on his neck that he was so proud of he said …he thought he was going to change something,” Hall said.

But Hall recalls the story of what happened when Ali tried to eat at an all-white restaurant.

With that in mind, Hall has drawn Ali in a dashiki.

“This is a traditional African garb, something you’d wear to feel connected to your ancestors, to your heritage, your culture,” Hall said. “It’s something you wear to celebrate what it is that you came from, who you are as a black man.”

Hall was appalled by news coverage of the African American Dallas shooter Micah Johnson wearing a dashiki. He says these images make people not want to connect to their culture, or even identify as a black man.

And Hall would know.

“I’ve been black, I’ve been 18,” Hall said. “I’ve had run-ins with the police myself. I’ve been locked up, I’ve been mistreated, I’ve been beat.”
Hall grew up in Chester, Pennsylvania where Martin Luther King Jr. completed his seminary studies. But in early grade school, he moved to Shillington, Pennsylvania: a city with a population of less than 1% African Americans and a majority of white citizens.

He got caught up selling drugs there.

“We used to sell drugs right in the park that was located directly behind the police station,” Hall said. “The police station was in the same park where everybody hustled.”

Hall continued selling drugs when he moved to Wilmington in 2006 and was arrested in 2007. When he get out of Howard R. Young Correctional Institute later that year, he moved to King of Prussia, PA to study computer networking and got a job at Villanova’s cafeteria and dining hall.

He was ready to get his life back on track, and wasn’t selling drugs anymore.

But he was pulled over and arrested again for something that had happened three years prior: forging Xanex and Percocet prescriptions and selling them. He ended up spending two months in jail followed by a year of probation.

He moved back to Wilmington the same year and started working a string of sales jobs.

But then his uncle was shot and killed in Reading, Pennsylvania in 2011.

The stress associated with the loss of his uncle, the loss of a relationship, being in and out of jail and not able to finish his education left Hall reeling with feelings of anxiety and depression. He realized he needed to do something different, and started boxing to deal with the pain.

“It felt good to get the aggression out, to get the pain out when I was hitting the bag,” he said.

He also turned to a higher power for support, and says he’s been “convicted by the Spirit.” He now attends the Mother African Union Church in Wilmington.

His path toward art started in a very different way – with a crush. He commissioned a painting of Muhammad Ali fighting Superman from an artist who just happened to be a girl he liked at the time.

“I thought a good way to talk to her would be to get her to do a picture for me,” he said.

He paid for half of the painting upfront, but he never received it. So he got his money back and instead started drawing and painting himself, incorporating mixed media and collage techniques into his pieces.

And he says art also helps to ease the pain he feels whenever he sees something negative in the news like another shooting.

Hall’s uncle was 30 years old when he was killed, and Hall will be 30 next year. But Hall has put his past behind him and is using the same software that he once used to design fake prescriptions for his art today.

“It’s personal, this is the way I’m fighting, this is the way I’m putting the fire out,” Hall said. “It’s my bucket of water to put out the fire that our house is engulfed in right now.”
He’s since finished another coloring book called We Are All Remarkable, featuring leaders of all races and nationalities.

He was up in Brooklyn last weekend speaking to over 500 kids at the Brooklyn Museum, and gave out 50 coloring books during the West Indian American carnival and Labor Day parade.

He wished he could have given a coloring book to all 500 kids he spoke to, and is looking for sponsors to help pay for the coloring books.

He’s started a Go Fund Me called BLMcoloringbook, and displays some artwork on his website, fineblackart.com.

One of his goals is to develop partnerships so that all Delaware schools distribute the coloring book to its students.