Gov. Jack Markell is known to be an avid cyclist, but this week he took a different kind of bike ride: on a rail bike. It’s one of the new attractions helping kick off environmental and economic revitalization efforts at the old NVF site in Yorklyn and highlight the 50th anniversary of the Wilmington and Western Railroad.

And Markell wasn’t the only one to give it a try. Delaware Public Media’s Megan Pauly also joined a group taking one of the over 600-pound bikes for a spin and in this week’s Enlighten Me offers a look at this unique opportunity to ride the rails.

Delaware Public Media’s Megan Pauly takes a ride on a rail bike, and tells us about the company bringing the unique opportunity to the First State.

My ride on the Wilmington & Western Railroad came on a cloudless, sparkling spring day. And yes, you heard me right – I did say on the railroad, but not in a rail car. Instead, on a rail bike.

“Rail bikes as an idea have been around for a really long time. They date back to the late 1880s when they used to use peddle-powered bikes on the rails to go out and fix problems on the rails, or fix forest fires. So they’ve been around a long time but this particular design – with recumbent seats and the way its designed and engineered- this is the only of its kind anywhere in the world outside of South Korea. And they’re right here in little Delaware!”

That’s Alex Catchpoole, Australian co-owner of Rail Explorers along with his wife Mary Joy Lu. The bikes are bright red open-air cars that look similar to a go-cart that you might see at a carnival. 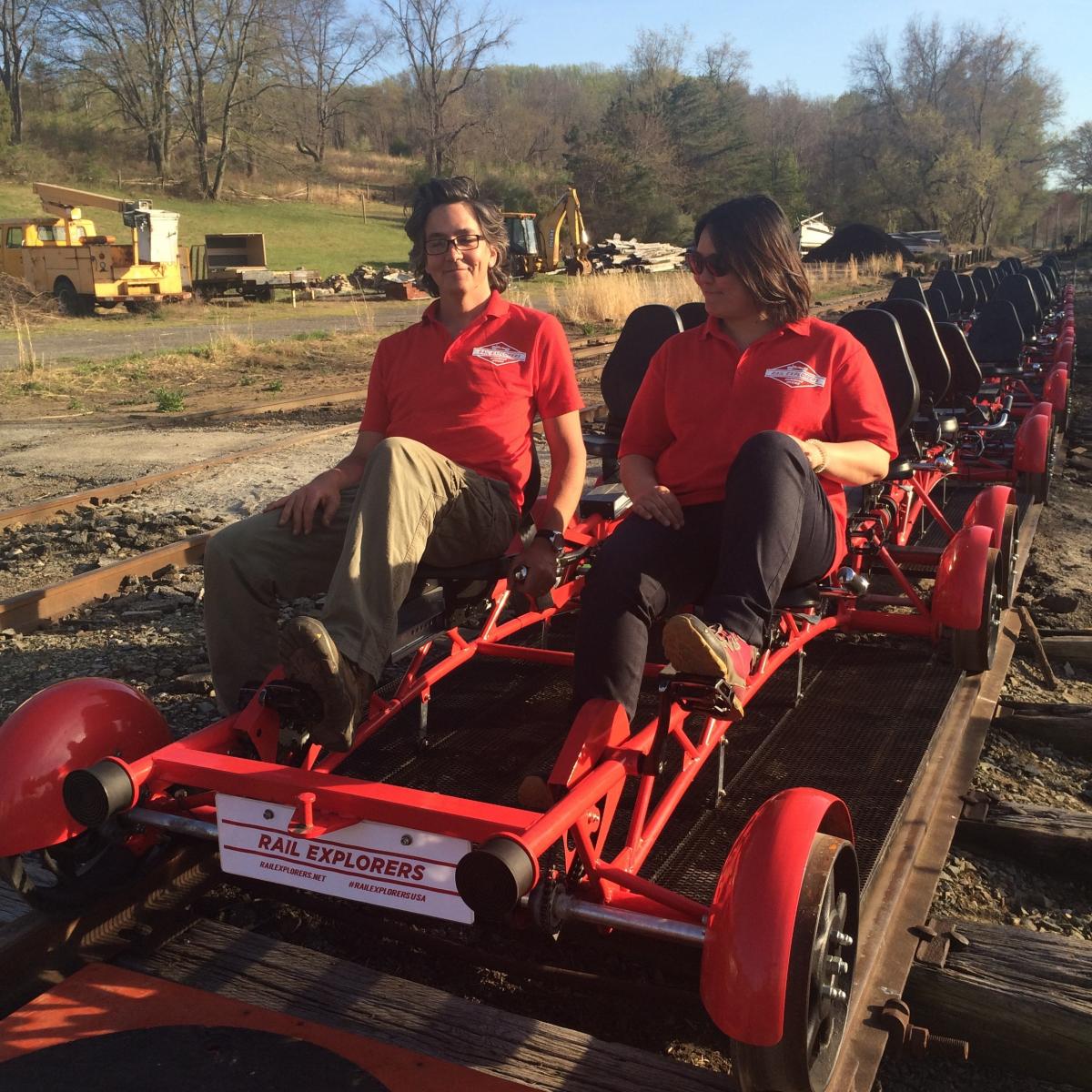 The couple developed their concept after a trip to South Korea, where the rail bikes are a common attraction.

And Lu says they turned to a South Korean designer to develop the rail bikes they use.

He’s this lovely, eccentric – he’s an artist actually,” Lu said. “So that’s why he doesn’t want to put any sunroof or anything on it. It’s about nature and getting out in nature. We put umbrellas on the rail bike so if it’s raining you just pop an umbrella up.”

Lu says the largest rail bike attraction is 3.5 hours outside of Seoul, and is packed year-round with hundreds of thousands of people and 200 rail bikes for an all-downhill 7 km trek.

The experience in Delaware is slightly different: five miles total, but out and back instead of one-way, winding scenically through the rolling hills of Hockessin.

“In the Adirondacks we had the junior luge come and ride with us,” Catchpoole said. “They were in training for the winter Olympics and they get them up to about 25-26 miles per hour. Wow! So they can move along. And at that speed you really know that you’re moving, it’s so much fun.”

Mary and Alex worked on their business model for four years before opening their first season in the Adirondacks last fall.

They previously spent 12 years living in the United States, two years back in Australia and before the business brought them back to the US.

“Where it got picked up first was back in America,” Lu said. “So we brought the dog, the kids, packed up, brought our rail bikes and came across to the Adirondacks.”

That operation remains their flagship. But Rail Explorers jumped at the chance to give The First State a try too.

“Delaware found us,” Lu said. “It was wonderful. The DNREC Matt Chesser found us, wrote to us and called us last November and said look, we’re really interested in talking to you guys. Can you come up and present to us because we think you could be a really great lynchpin for this new development. And we had no idea where Delaware was. And we were like ok, let’s have a look. And we thought, wow, that‘s pretty cool.”

Lu says Rail Explorers is the only large commercial operation of its kind in the U.S. because of the safety hoops they’ve had to jump through.

“Even though it looks like a simple thing, it’s like an iceberg,” Lu said. “It looks very simple and innocent on the top, but there are a lot of things that go on underneath to make it a safe and seamless enjoyable ride.”

And ensuring safety goes beyond the bikes themselves. They have staff with flags at all crossroads, and have a mandatory safety talk before each ride.

“We just assess every rider, make sure they’re OK, they’re not intoxicated, that there’s somebody that’s going to be on the brake that’s not drinking a latte and got his phone on,” Lu said. “Because that person does have to have their brake in check.”

On my ride with the couple, we went over a few crossings, during which Lu jumped out ahead with a yellow safety jacket and flag to wave us across safely. But since we had to come to a complete stop – and since we were towing another car to turn around in before they were to install a turntable the next day – it was a little hard to get started up again.

Lu says one of the company’s goals is to make the experience accessible to all, ensuring that multiple generations can ride together in what she calls a “walk in the park.”  And since the riders won’t be towing another car like we were, I’m wondering if I can convince my grandma to take a ride with me as well.

“A lot of grandparents bring their grandkids. What we were so blown away by was that connection that they all have,” Lu said. “They come off the rail bike and they’re bonded, they’ve shared something. And you should just see how empowered the grandparents feel. Like you know, we’ve brought our grandkids to something cool.”

The attraction launched last Thursday and runs through June 15 with tours running 10 am to 7 pm Thursday through Sunday. The rides depart from 200 Gun Club Road in Hockessin.

And Rail Explorers hope this eight-week run here is just the beginning. They’d like to come back in the fall, and beyond.